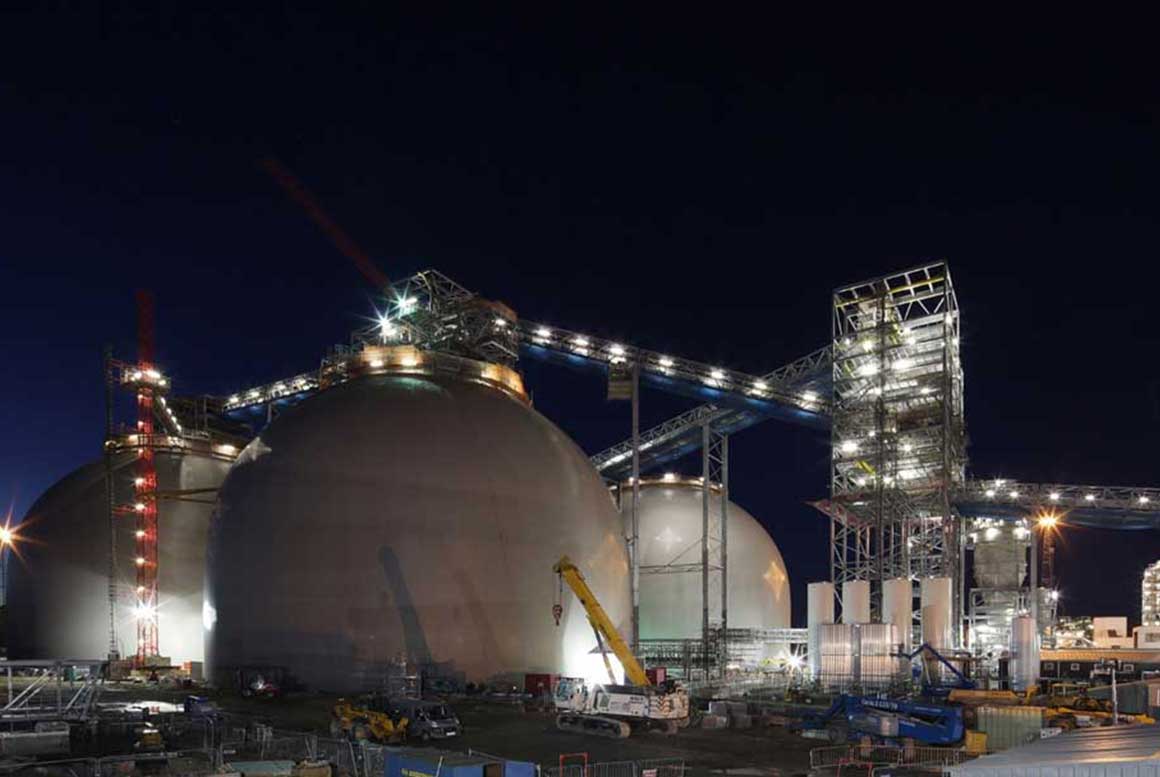 The ECOSTORE project gave Drax the capacity to store enough compressed wood pellets to supply the three generating units it has upgraded from coal to sustainable biomass.
The station can burn up to 8 Million tonnes of biomass fuel a year. It can accommodate three types of biomass – forestry and forestry residues (thinning’s‚ tops‚ branches)‚ agricultural residues (straw‚ oat husk) and energy crops (Miscanthus and willow).

Whilst coal can be stored outside‚ biomass needs to be kept dry in covered stores as it biodegrades when wet and crumbles. Four large storage domes are required to store up to 320‚000 tonnes of the material on site.

All biomass material to be stored in the ECOSTORE facility is delivered by train. Two new rail un–loading systems have been provided which can unload two trains simultaneously. This continuous unloading facility does not require the trains to stop during discharge.

When operating at full capacity the three converted boilers require seventeen trains every day to meet demand. The purpose–built rail wagons have doors underneath which are opened and closed automatically as the trains pass through the rail unloading bay. 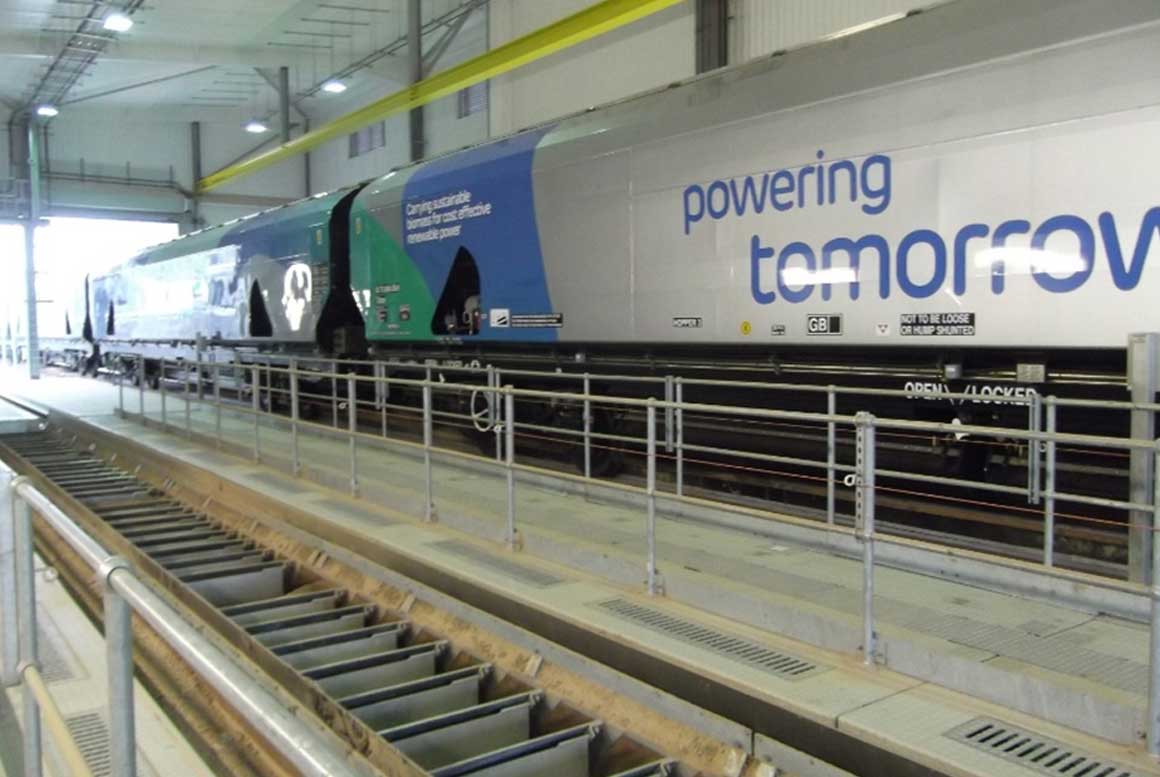 The biomass pellets are transferred from the rail unload facility either to one of four storage domes or direct to the boiler distribution silos by a parallel stream of belt conveyors. Each stream is rated to deliver up to 2800TPH.

Biomass material can contain various foreign materials which must be removed as far as possible before milling. After rail un–loading the pellets are therefore passed through a series of screens and magnets. A screen house is also provided for automatic removal of smaller foreign material using four rotating disc screens. The screen house also contains four powerful over–band magnets designed to remove ferrous contamination. All reject material from the disc screens and the magnets is collected in skips for subsequent disposal.

It is essential to provide enclosed storage for the biomass material which‚ unlike coal‚ cannot be stored in the open air until it is used. Storage domes were selected due to their suitability for large scale gas tight storage. The domes have a working volume of 112‚500m³ and are 50–metre high and 63–metre in diameter. The domes are constructed from an inflated fibre reinforced polymeric air–form with 50mm internally sprayed urethane foam. Shotcrete is then sprayed onto reinforcing bars in a number of layers to form the main structure‚ which is an average of 300mm thick. The inflated air form provides the outer protective layer.

Biomass discharge or reclaim is facilitated by the use of two rows of eight hopper outlets in the silo floor‚ feeding through vibratory feeders onto belt conveyors in the tunnels below the silos. The floors of the silos are of a ‘W’ profile at a 10ºpitch‚ with the low points centred over the underground reclaim tunnels.

The dome floor is lined with vibratory panels which when operated‚ cause the material to flow down the slope into the hoppers until all material has been reclaimed. Vibrating feeders are fitted to the sixteen dome outlets to feed the material to one of four Biomass Conveyors running in Reclaim Tunnels beneath the Storage Silos. 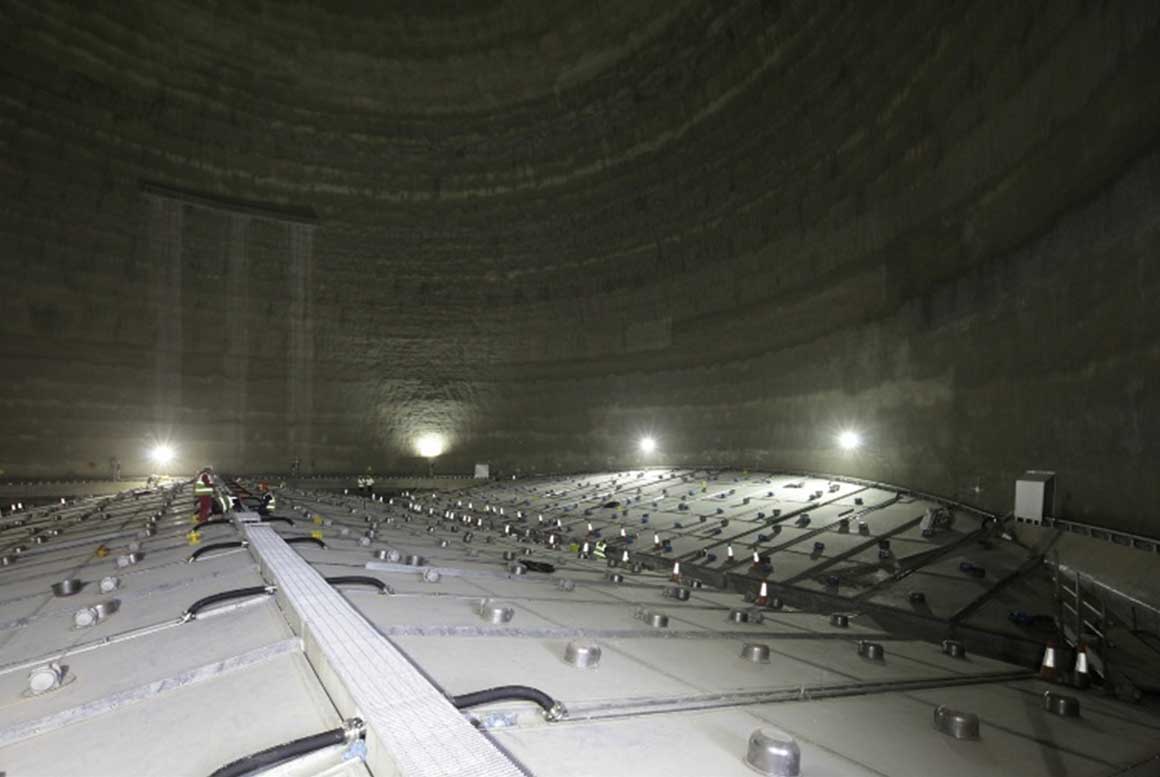 The biomass can be transported to the boiler distribution system at a rate of up to 2800TPH via two parallel streams of belt conveyors.

Two day silos are installed to provide each of Units 1‚ 2 and 3 with Biomass fuel at a rate of approx. 320TPH per boiler. These silos provide approximately 2–3 hours storage capacity and provide a buffer between the dome reclaim system and the mill feed systems which modulate rate in response to boiler demand.

Each Unit has ten existing coal mills which are fed with biomass at up to 50TPH by a dedicated continuous loss–in–weight conveying system. A total of thirty such conveying systems are therefore provided.

Conveying to the existing coal mills is by pneumatic conveying‚ allowing transfer of biomass material in a fully enclosed pipeline to minimize the chance of dust release inside the boiler house as this presents a serious explosion or fire risk.

The biomass fuel is automatically sampled in order to determine calorific value‚ moisture content etc. a dedicated sampling building is provided to house the sampling equipment and sample carousels. Due to the scale of the transfer system‚ the primary sample collected needs to be further reduced through both secondary and tertiary samplers to ensure the final sample is representative of the bulk. Pelletsamples are collected in 30litre containers by a carousel system that can accommodate 12 containers.

The rate of pellet consumption is determined by inline belt weighers installed just after the sampling building on belt conveyors which transfer fuel to the BDS silos. The pellet weighing system is OFGEM approved.

Drax has an existing storage facility which is now predominantly used for storage of biomass pellets produced from agri–fuels such as straw‚ peanuts‚ miscanthus‚ bagasse etc. These are too chemically aggressive to be burned “neat” in the boilers and are therefore blended with wood based pellets reclaimed from the Ecostore facility. These are combined onto one of two parallel streams that transfer from the domes to the BDS silos. Two new belt conveyor streams were provided which link the existing storage silos to the new boiler distribution system. Each conveyor stream is rated at 1000TPH‚ allowing agri–fuel blends of up to 30% by weight.

In addition to being potentially explosive‚ biomass material also has the potential to self–heat in storage and is therefore monitored for signs of biological activity or combustion. The domes are maintained with a depleted Oxygen atmosphere by the addition of Nitrogen. This is generated on site using pressure–swing absorbers. A back–up liquid Nitrogen system is also provided.

The three Units are now fully operational on Biomass. John Pethullis was Project Engineering Director for this project‚ responsible for the process design and technical procurement. ECOSTORE is the biggest renewable energy project in the world and saves 10Mte’s of CO2 per annum.

John’s contribution to this project was recognised by Bulk Materials Handling trade organisation SHAPA in 2015 by the award of “Individual award of the year” largely for his contribution to the ECOSTORE project. Drax Power also receiveda SHAPA award for the Ecostore project‚ awarded “for their forethought‚ cooperation and sheer determination throughout a lengthy but highly successful process” 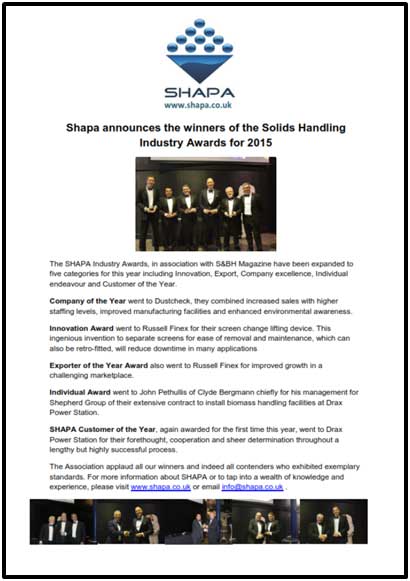 Back to Latest Projects